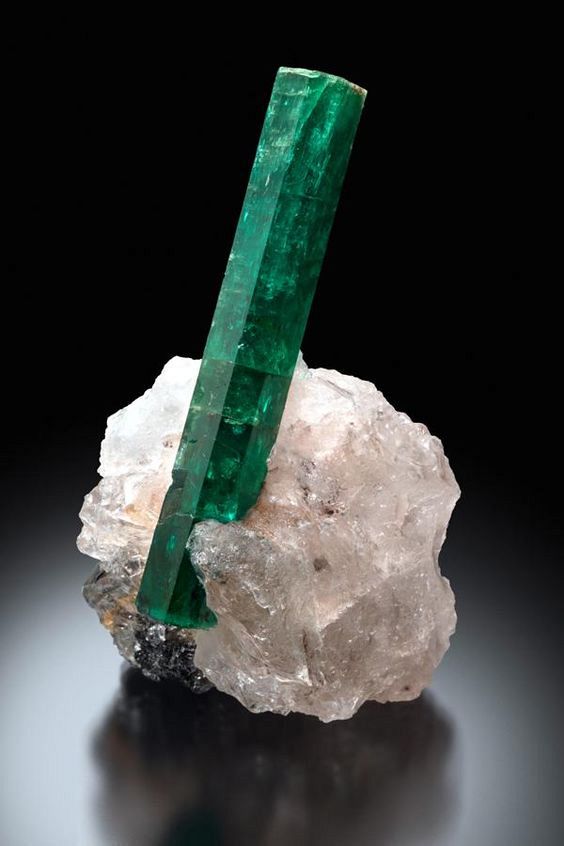 Emerald is a green variety of Beryl, a beryllium aluminum silicate mineral with a hardness of 7.5 to 8. Its pigment is chrome and/ or vanadium. Its crystal system is hexagonal (trigonal). The term emerald is derived from the Greek smaragdos, which means ‘green stone,’ and in ancient times was applied, to a number of other green gemstones. The earliest Emerald mining was done in Egypt, perhaps as long ago as 1300 B.C. When the Spanish invaded South America in the 1500s, they saw native leaders wearing Emeralds that far surpassed those from the Egyptian sources, and these eventually came to dominate the Emerald trade. In ancient Rome, Emerald was viewed as a symbol of fertility and was associated with the goddess Venus. Christian legends speak of Emerald as the stone of resurrection. Other lore has maintained that Emerald cures a variety of diseases, assuages fear, improves memory, enhances persuasiveness, brings joy and even bestows the gift of prophecy. Ancient alchemy speaks of a sacred ‘Emerald Tablet’ upon which was inscribed the recipe for transformation and enlightenment.

Of all gemstones, Emerald is the purest crystalline emanation of the Green Ray, color of the heart chakra. This chakra is at the center of our physical selves, and it is our center on many other levels as well. The heart chakra is the wellspring of the emotions, particularly love and compassion. Love and compassion are the emotions which most truly reflect one’s Divine nature, and they are the rightful focus and aspiration of those on the spiritual path. Emerald is the stone which most purely represents the energy patterns of the activated heart chakra. It is the stone that helps one to live and act from the heart level, offering unconditional love and compassion in one’s daily life and relationships, opening one to receive love from others and clearing the channel for one’s own connection with Divine Love. Emerald can help one stayed centered in the heart’s wisdom, so one is not misled by ideas which sound reasonable but are not truly ‘paths with heart.’ Emerald can help one to heal ‘heartbreak’, and to remember to give love to oneself as well as others. An open heart allows the cornucopia of universal blessings to flow into one’s life, and perhaps this is why Emerald is also known as a stone of prosperity. Wearing Emerald helps attune one’s vibrational pattern to the spectrum of abundance, allowing one to attract what one needs and desires. Emerald is also a stone of courage— another emotion which emanates from the strong and open heart. It helps one move forward on the ‘path with heart,’ regardless of any threats or dangers which seem to threaten one. Like Moldavite, Emerald is associated in legend with the fabled Stone of the Holy Grail, the gem which activated and directed the spiritual adventures which eventually brought enlightenment and wedded bliss to the knight Percival.