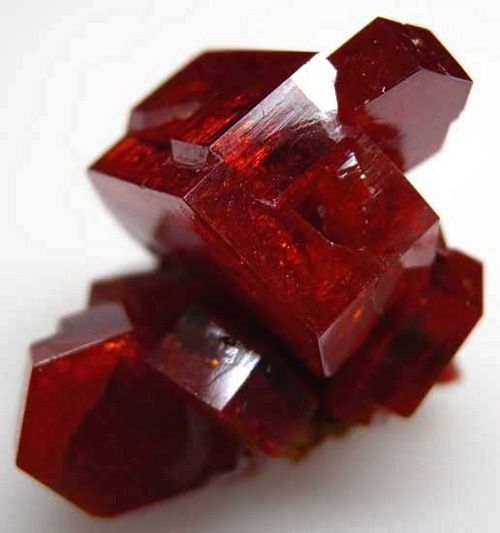 Garnet is a gemstone most commonly known to be red, but in fact it is found in a variety of colors. The six types of Garnet— Rhodolite, Almandine, Spessartine, Grossular, Andradite and Uvarovite— have different colors, chemical formulas and spiritual properties, and we will examine each of them in turn. Most, but not all Garnets are varieties of aluminum silicates. Their hardness varies from 6.5 to 7.5. Their crystal systems can be isometric, rhombic, dodecahedron and/ or icositetrahedron. Some types of Garnets have been known and used for thousands of years, while others, like Tsavorite, a Grossular Garnet, were discovered only decades ago. The word Garnet is derived from the Latin word granatum, which meant ‘pomegranate,’ a reference to the stone’s similarity in form and color to a pomegranate seed. Garnets were used in the former Czechoslovakia as far back as the Bronze Age, and in Egypt more than five thousand years ago. They were used in Sumeria around 2100 B.C. and in Sweden between 1000 and 2000 B.c. They were also popular in ancient Greek and Roman civilizations. Aztec and other native American peoples used Garnets in ornamental objects as well.

Garnets are tools for making the products of creative imagination manifest in the three-dimensional world. The various kinds of Garnet are keyed to different types and levels of manifestation, but all are good for grounding one’s dreams and desires in the physical domain.

All types of Garnet carry the energy of prosperity and the enjoyment of worldly pleasures. Each variety of Garnet carries this theme to a different level of experience.