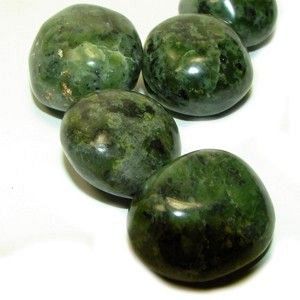 Jade is a name shared by two distinctly different minerals— Nephrite, a calcium magnesium silicate, and Jadeite, a sodium aluminum silicate. Nephrite has a hardness of 6 and Jadeite has a hardness of 6.5 to 7. Both have monoclinic crystal systems and are exceptionally tough stones, a trait caused by their finely interlocked and strongly bonded crystal structures. The name Jade is derived, rather accidentally, from the Spanish term piedra de yjada (or lapis nephrictus in Latin), meaning ‘stone of the loin.’ When the term was misprinted in a French translation, it became pierre le jade. The first Jade arrived in Europe from Mesoamerica, brought back by the conquistadors. During the seventeenth century, when Jade supplies from the Americas had diminished, Chinese carvings of similar-looking stone were labeled Nephrite, from the Latin, and it was later discovered that these were different materials from the original American Jade.  Nephrite generally occurs in three colors— white, deep green and creamy brown. Jadeite can be leafy green, blue-green, emerald green, lavender, greenish black, deep emerald green or black. In China, Jade has been the most highly esteemed stone throughout recorded history. For many centuries it was believed to strengthen the body during life and protect one after death. Similar beliefs also existed in pre-Columbian Mexico and Central America. The Maoris of New Zealand also cherished Jade as a powerful talismanic stone. The various types of Jade and Jadeite are still prized for their healing and protective properties, but new aspects of their spiritual energies are also being discovered. In discussing metaphysical properties, we will refer to both Nephrite and Jadeite as Jade.

Green Jade is a stone with a heart of healing, and a stone for healing the heart. The color of these stones is pure heart-chakra green, and the energies are so strong and steady, one feels a flow of well-being and balance almost immediately upon touching them. These are good stones to wear during sleep, both for their harmonious and nourishing vibrations and for their beneficial effect upon one’s dream life. Green Jade is the color of grass and leaves, and it fosters wholesome and steady growth of one’s chi, or life-force energies. It is recommended that one try wearing or carrying Green Jade when hiking, gardening or relaxing out of doors, because it draws upon the Earth’s life force and imbues one’s auric field with that energy. When one cannot be outside, Green Jade can help one carry the signature of Nature into even the most artificial environments. Green Jade can harmonize and balance the heart chakra, aiding in both emotional and physical well-being. It can be used to attract abundance and prosperity and to broadcast peace and loving-kindness to all those in one’s surroundings.