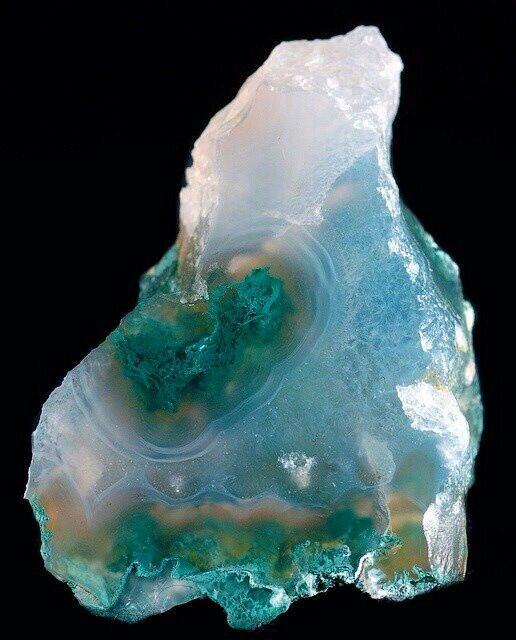 Moss Agate is not technically a true Agate, because it is not banded. It is a chalcedony with dendritic inclusions of moss-colored green minerals. Spots of red also occur in some specimens. Many of the best Moss Agates come from India.

Moss Agate is one of those stones that would be beneficial to almost everyone. Its energies are modest but wholesome. It emanates the vibrations of balance and stability in the physical domain. It is an excellent stone for individuals convalescing after an illness, or for those ‘in recovery’ from addictions. Like the tortoise in the old fable, the motto of Moss Agate is ‘Slow and steady wins the race.’ Moss Agate can assist those who feel ungrounded or unstable. It enhances mental concentration, persistence, endurance and bringing one’s goals to completion. It can be used as a talisman for increasing the effectiveness of physical workouts and even bodybuilding. Meditating with Moss Agate, one can project the image of a completed project or goal into the stone and the stone will magnify the energy of one’s intention, thus assisting in the achievement of the goal.

The deep, clear energy of Moss Agate assists one in connecting with Earth energy and the devic realm. The stone is grounding in the sense that it assists one in connecting to the Earth, at the same time that it stimulates psychic contact with elementals and Nature spirits. Moss Agate can be employed to assist one in bringing ideas and concepts into being through its grounding influence. It is an excellent stone for use in abundance work, as it promotes the sense of all things being provided for us within creation.