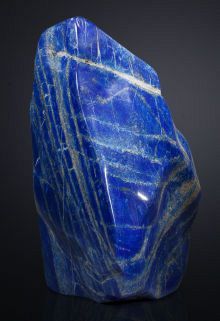 Lapis Lazuli is a sodium aluminum silicate with sulfur, chlorine and hydroxyl, and variable inclusions of Pyrite and White Calcite. Its hardness is 5 to 6 and its crystal system is isometric, mostly aggregate. The ancient Greeks and Romans called the stone sapphirus, until the term Lapis Lazuli began to be used in the Middle Ages. In Latin, the name means ‘blue stone,’ and this came from the ancient Persian word lazhuward, which meant ‘blue.’ The ancient Egyptians used Lapis in scarabs, beads, pendants and other jewelry as far back as 3100 B.C. In that civilization, it was also ground into powder for use as a medicine and as a cosmetic for eye shadow. The golden sarcophagus of King Tutankhamen is richly inlaid with Lapis, as were the burial ornaments of other Egyptian kings and queens. Lapis was also a stone of royalty in ancient Sumer and was treasured in China at least 2,500 years ago. During the European Renaissance, Lapis was widely used for carving art objects, and Catherine the Great decorated a room in her palace with Lapis walls, fireplaces, doors and mirror frames. Buddhist beliefs recommended Lapis Lazuli as a stone to bring inner peace and freedom from negative thoughts. In Europe Lapis was also thought to cure various illnesses and to be an antidote for snakebite.

Lapis was used to entomb and decorate the Pharaohs of ancient Egypt. As a stone of royalty and spirituality, it was unsurpassed. It still carries the vibration of the inner ‘king’ or ‘queen’ that lies buried in each of us. For those who wish to awaken that aspect of the self, Lapis is a steadfast aid in the deep inner journey. To know oneself deeply is to resurrect one’s inner Divine nature. Therefore Lapis actually is the stone of royalty in its truest nature, and its path of self-knowledge is the means of uncovering that truth. Lapis activates the psychic centers at the third eye, allowing one to develop enhanced intuition and access to spiritual guidance. It is a stone of visionary awareness, bringing new information to the mind in images rather than words. It enhances intellectual ability, making one a better learner and teacher. It is a stone of truth and a stimulating influence to the throat chakra— therefore it assists one in both discerning and speaking the truth in all situations. Lapis is a stone of initiation as well— gifting a friend with Lapis jewelry can be a catalyst for a mystical journey to higher awareness. Lapis is often particularly attractive to individuals with past-life connections to ancient Egypt, and meditating with the stone can assist them in recovering memories of those past lives, aiding evolution in the current incarnation.