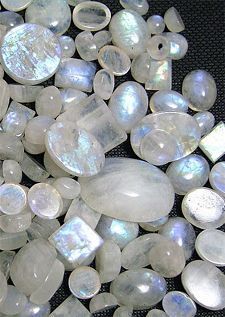 Moonstone is a feldspar mineral, a potassium aluminum silicate with a hardness of 6 to 6.5. Its crystal system is monoclinic and prismatic. Moonstone was named after its blue-white sheen, which is caused by its lamellar structure. Moonstone was used in Roman jewelry almost two thousand years ago, and even longer ago in the Orient. It was a popular choice of jewelers during the Art Nouveau period. In India, Moonstone has always been a sacred stone, with a special significance for lovers. It was believed that placing Moonstone in their mouths when the moon was full would allow them to see their future. Moonstone is also a traditional wedding gift there, for bringing harmony to the marriage. In Europe, Moonstone was said to reconcile estranged lovers, and to cure sleeplessness.

Moonstone is the gem of the High Priestess, keeper of the feminine mysteries. In its reflected light we can project and thereby observe the hidden truths that reside in the depths of ourselves, out of the light of consciousness. Moonstone is a talisman for the inward journey, and meditation with it can take one deep into the self. What is revealed there is often recognized as the missing piece or pieces of the puzzle of one’s life— parts of the soul that have been left behind or forgotten. Moonstone can also take one on a journey into past lives. It is an ideal stone to wear during past-life regression sessions. It can reveal to women their feminine power and their connection to the goddess. For men, it allows the expression of the feminine side, an important step on the path to wholeness.