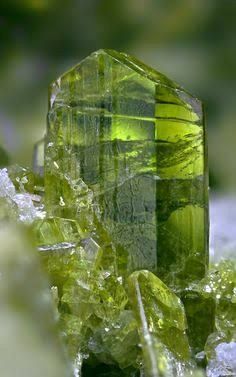 Peridot is a magnesium iron silicate mineral with a hardness of 7. Its crystal system is orthorhombic and it generally forms in short, compact prisms which are vertically striated. Its olive to lime green color is caused by iron. The name Peridot is of Greek origin, but the original meaning is not known. Chrysolite is a name sometimes used to describe yellow-green Peridot, and this name is derived from the Greek words meaning ‘gold’ and ‘stone.’ For three thousand years, Peridot has been gathered and mined on the inhospitable Egyptian Island of Zagbargad. The name Zagbargad is Arabic for Olivine, or Peridot. The Egyptians made Peridot beads some 2,500 years ago. It was also used for rings and other jewelry in Greece and Rome in the third and fourth centuries. In the 1800s, Peridot was a popular gemstone in the United States and Europe. Since ancient times, Peridot was viewed as a symbol of the sun, and in Greece it was believed to confer the energy of royalty to the wearer. It was sometimes worn as a protection against evil spirits, and in thirteenth century England wearing a Peridot engraved with the symbol of a torchbearer was believed to bring wealth. Interestingly, the idea of Peridot as a stone of prosperity has resurfaced in present-day intuitive information.

These stones are little green nuggets of positive power. Their vibration brings an inner sense of warmth and well-being, like sunshine on a spring day. Peridots help one activate and harmonize the third and fourth chakras, creating an integration of Love and Will. They can assist us in having the courage to act out our heart’s desires, and to be generous to others, even as we pursue our individual destinies. Peridot is a stone of financial and spiritual abundance, and it can aid in attracting and creating our most important inner visions here on Earth. Peridot can be used to bless and energize one’s work, whether it be tending one’s garden, raising children, working as a healer, building a business, or assisting others in such activities. It is not a stone to take one ‘out of this world.’ Rather, it is a tool for helping to bring the physical dimension of reality into alignment with one’s inner truth. This most definitely includes success and abundance in one’s career endeavors, if one is doing one’s right work, and if one believes oneself to be deserving of success. Peridot can assist one in reestablishing a sense of self-worth if one is plagued by guilt or regret for past deeds. It quiets spiritual fears— for example, those related to a feeling of karmic debt— and allowing one to move forward on one’s evolutionary path. It supports one in taking responsibility and making amends for any suffering one may have caused others.