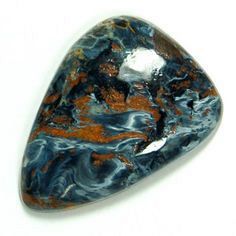 Pietersite is a member of the Quartz family, a silicon dioxide mineral with a hardness of 7. Its crystal system is hexagonal (trigonal). It forms in masses that are pseudomorphic Jasper inclusions after asbestos. It is characterized by dramatic chatoyance and contrasting colors that include shades of gold, brown, gray, blue-gray  and black, as well as occasional clear colorless areas.

Pietersite creates a unified activation of the solar-plexus and third-eye chakras, engendering a powerful increase in the energy of the will and in one’s intuitive capabilities. Under the influence of Pietersite, one’s keen insights into the nature of situations lead to decisive actions aimed toward influencing the outcome in ways favorable to one’s hopes and desires. In other words, one sees what’s going on, knows what one wants, and goes after it. With Pietersite’s gift of increased power, the likelihood is high that one will achieve one’s aims. As Pietersite stimulates the third eye in its own precise way, one’s ability to understand the nature of the moment expands into an awareness of the future or the array of probabilities from which the future emerges. In addition to its other traits, Pietersite enhances clarity of thought and encourages intuitive leaps. With Pietersite, one can more easily see the threads of connection between disparate thoughts and schools of thought, bridging the chasms between them with illuminated insight. This is an excellent stone for students, researchers and spiritual seekers studying the philosophies of mysticism.