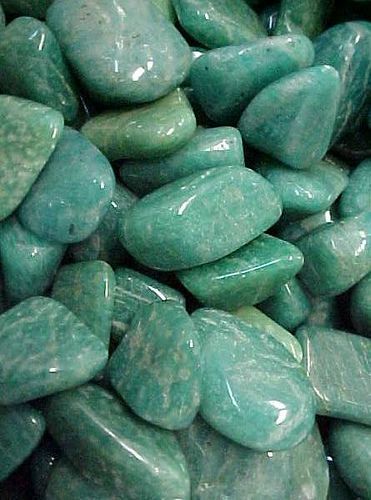 Amazonite is an alkali feldspar mineral, a potassium aluminum silicate with a hardness of 6 to 6.5. Its crystal system is triclinic and prismatic. Its color is green or blue-green. Its name derives from the Amazon River in Brazil, where there are important Amazonite deposits Amazonite is also found in Colorado, India, Madagascar, Namibia and Russia. Amazonite jewelry was produced as long as four thousand years ago. It was used in India, Egypt, Sudan and Mesopotamia. The seventh chapter of the Egyptian Book of the Dead was engraved on Amazonite, and an Amazonite scarab ring was among Tutankhamen’s treasures. It is believed to have been the third stone in the breastplate of Moses. Amazonite was also used in jewelry worn in pre-Columbian South and Central America. In ancient Egypt, Amazonite was a popular amulet stone, and the Assyrians associated Amazonite with the god Belus. Amazonite is a stone of harmony, both within the self and among people. It is a truth-teller and a peacemaker, assisting one in communicating one’s true thoughts and feelings without over-emotionalism. This is the first step towards both inner and outer peace. The second step is activated by Amazonite’s awakening of compassion through stimulation of the heart chakra. Once one has expressed one’s truth, it is necessary to assume the other person’s point of view in order to achieve harmony, and Amazonite facilitates this. A similar process operates within oneself, as the competing factions of one’s personality with their separate motivations and desires come to awareness through self-examination.