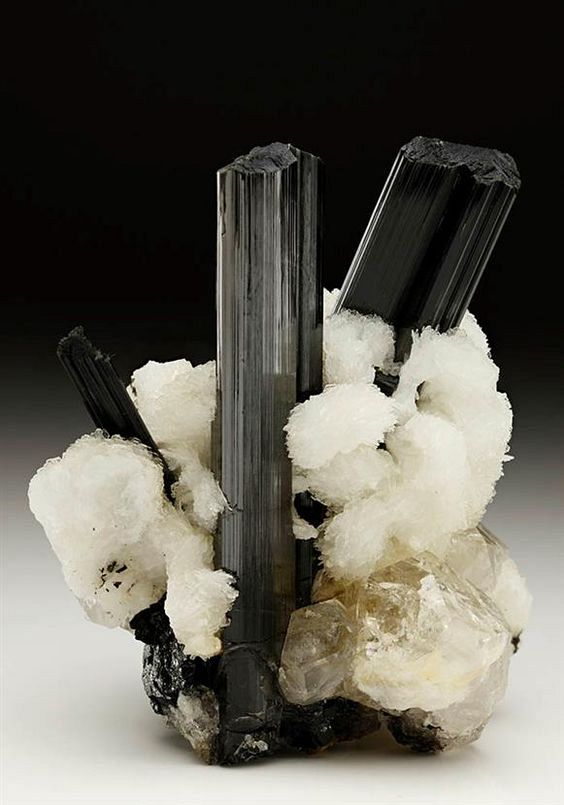 Tourmaline is one of the most significant mineral groups for metaphysical use, and it includes a wide variety of different forms, colors and energy spectrums. Although Tourmaline can be found on every continent, fine crystal specimens and gems are still considered rare and often command high prices. Tourmaline made its entry into the commercial world of gems in 1876 when George Kunz sold a Green Tourmaline gem from Maine to Tiffany and Co. In the ensuing years, Tourmaline gained great popularity as a gemstone, and more recently its subtle energy properties have made it a favorite of metaphysical collectors and practitioners. Tourmaline is a complex aluminum borosilicate with a hardness of 7 to 7.5. Its crystal pattern is hexagonal (trigonal) with prismatic crystals and striations running parallel to the main axis. No other gemstone has such wide variations in colors. Tourmalines can be red, pink, yellow, brown, black and various shades of green, blue lilac and violet. Often the colors vary, sometimes widely, within a single specimen. Crystals with a pink center, surrounded by an outer layer of green, are called Watermelon Tourmaline. Heating and cooling, or rubbing a Tourmaline crystal can cause it to become electrically charged, with one end negative and the other positive. When charged, the crystal will attract dust particles or bits of paper. This property of pyroelectricity (from heat) or piezoelectricity (from pressure or rubbing) was known to Dutch traders who used the crystals to pull ashes from their meerschaum pipes, and they called them aschentrekkers or ‘ash pullers.’ Tourmalines were known in ancient times in the Mediterranean. A likeness of Alexander the Great carved in India and dated around the second or third century B.C. confirms this. In the early 1700s, Tourmalines were imported from Sri Lanka to Europe by Dutch traders. It was given the Sinhalese name Turamali, meaning ‘something small from the earth.’