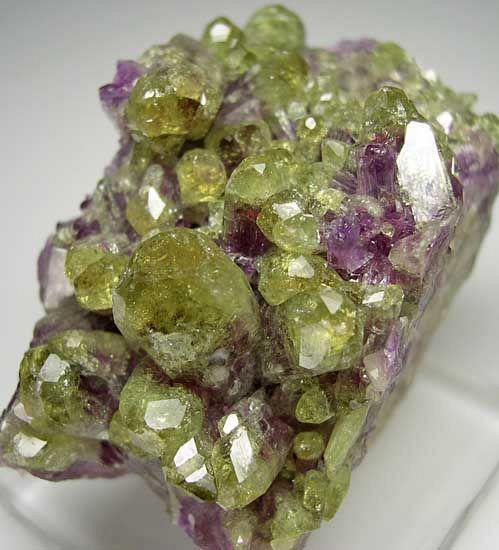 Vesuvianite, also known as idocrase, is a calcium aluminum magnesium silicate mineral with a hardness of 6 to 7. Its crystal system is tetragonal. It can form in short prismatic or pyramidal crystals, as well as in massive, compact, granular or columnar habits. Its color can be green, purple, red, white, brown or yellow. It occurs in the igneous rocks nepheline and syenite, as well as in impure limestones. It is found in association with such minerals as Calcite, Epidote, Garnet and Diopside. Vesuvianite was discovered on Mount Vesuvius in Italy, from which its name is derived.

Vesuvianite is a highly energetic stone, capable of affecting any of the chakras, though the predisposition of a certain specimen will vary according to color. Yellow-green Vesuvianites can help stimulate and integrate the solar-plexus and heart chakras, making it easier for individuals to align personal will with the promptings of the heart. This alignment of the will with the heart is of major importance, for it describes the solution of the battle between the ego and the Self. When the ego, which often has control of the will, surrenders the command it has usurped from the heart (one’s true Self), then the individual can become whole. By providing an energetic template of this as an accomplished fact, Vesuvianite allows the user to assimilate the vibrational pattern of integrated wholeness. Vesuvianite is also useful for the manifestation of the heart’s desires here on earth. It is supportive of one’s taking one’s true path or calling in life. It aids one in finding the courage to make changes in jobs, relationships, habit patterns, thoughts and emotions in order to fully realize the heart’s yearnings. Those who are making major life changes in order to heed this inner call are advised to carry or meditate with one of the yellow-green Vesuvianites, in order to proceed with the resolve necessary to actually make the changes. If one feels unsure of one’s heart’s desire, the pink-purple variety of Vesuvianite may make one more aware. Vesuvianite is useful for combatting negative thoughts and bringing enthusiasm back into one’s life. It helps one achieve the insights that inspire one to move forward in one’s spiritual development. It assists in releasing unconscious fears and limiting beliefs. It helps one to develop assertiveness and aids the timid in overcoming fear of confrontation. It can catalyze the opening of the unconscious, so one can see which old wounds or bad memories are holding one back, and it allows for the release of these patterns. Vesuvianite helps those going through transformational work such as psychotherapy, breath work, past-life regression and other modalities of inner growth. Its ability to bring hidden material to consciousness and its enhancement of courage make it a most useful ally.