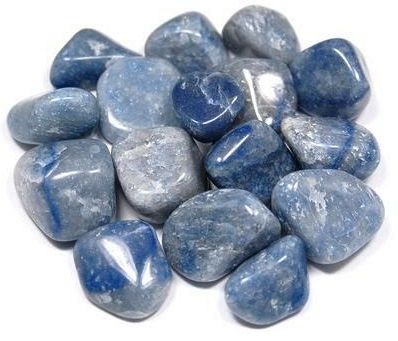 Blue Quartz is simply macro crystalline quartz that is blue. The term is used for, at least, three different types of quartz:

The color can vary from gray to deep blue. Natural blue quartz is always colored by inclusions of other minerals, not by trace elements or color centers, so it is never transparent, just translucent.

Hardness on the Mohs scale: 7

A helpful aid in any issues requiring diplomacy, Blue Quartz is a soothing and calming stone, bringing a relaxing, peaceful vibe to any situation. Many use Blue Quartz to cleanse the aura and to clear away even the toughest energy blockages. By focusing in on the Third-Eye Chakra, Blue Quartz can help one to connect to higher realms and work with ascended beings, and brings great clarity to psychic visions and enhances dream work.

Blue Quartz enhances organizational abilities, self-discipline and orderliness by balancing the Throat Chakra and enhancing communication between upper and lower Chakras. Using blue quartz also helps to improve one's communication skills, including not only communication with others, but also communication from the higher self into the 3D self. Physically, blue Quartz is said to enhance the immune system and encourage proper function of the Lungs, Heart, Throat, and Eyes.