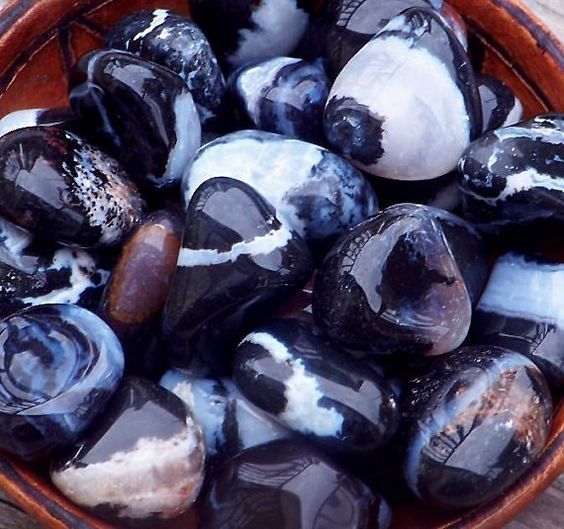 Sardonyx combines alternating layers of sard and onyx; hence its name. Sard appears anywhere from a dark orange to red to almost black. Onyx, although thought by most to only appear in black, can appear in almost any color. These two types of the mineral chalcedony are paired in bands to create sardonyx. Also known as Sardian Onyx, it may be clearly banded or have a less defined mix of colors. Hardness is 6 ½  -7 (mohs).

Sardonyx can be traced back four thousand years to Ancient Egypt. For most of its history, this stone has been used to create cameos and intaglios. In Ancient Rome, women wore sardonyx necklaces with cameos of Venus in hopes of harnessing the power of the goddess of love. It was also common for soldiers to wear sardonyx rings and carvings containing images of Mars, the god of war, into battle as a means of protection.

Used as a stone of strength and protection since ancient times, sardonyx is associated with courage, happiness and clear communication. It brings lasting happiness and stability to marriage and partnerships. The spiritual values of red and white-banded and red bullseye sardonyx make these stones particularly powerful. In fact, they are said to allow one to project such an incredible charisma that many people suggest the stone be used with care to avoid overwhelming others. Wear them, they say, when you want extra power in a particular circumstance.