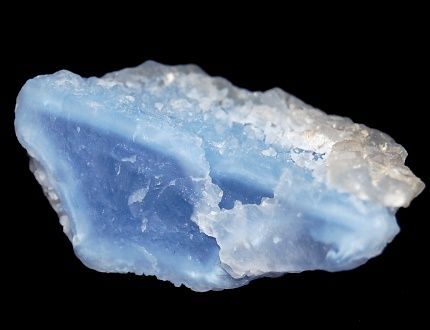 Chalcedony is a silicon dioxide mineral composed of submicroscopic Quartz grains, colored and sometimes patterned by other pigmenting minerals. Its hardness is 7.

The name Chalcedony may have been derived from the Greek port city of Chalcedon. Varieties of Chalcedony were worked into jewelry and carvings by the ancient civilizations in Egypt, Greece and Rome. As gems of antiquity, they were believed to imbue their holders with various benefits.

When there is a need for softness in the auric field, at times when stresses mount and one’s center begins to wobble, Blue Chalcedony can restore calm and balance. This stone utilizes the energy-magnifying capacity of Quartz, its main constituent element, to beam out its serene vibrations in ways that soothe one’s whole being, from the conscious mind to the inner child, and all the way down to the animal self. Because it is a strong representative of the Blue Ray, associated with the throat and third-eye chakras, Blue Chalcedony affects the mind on many levels.

It aids one in being more positive, conscious and clear in one’s communications.