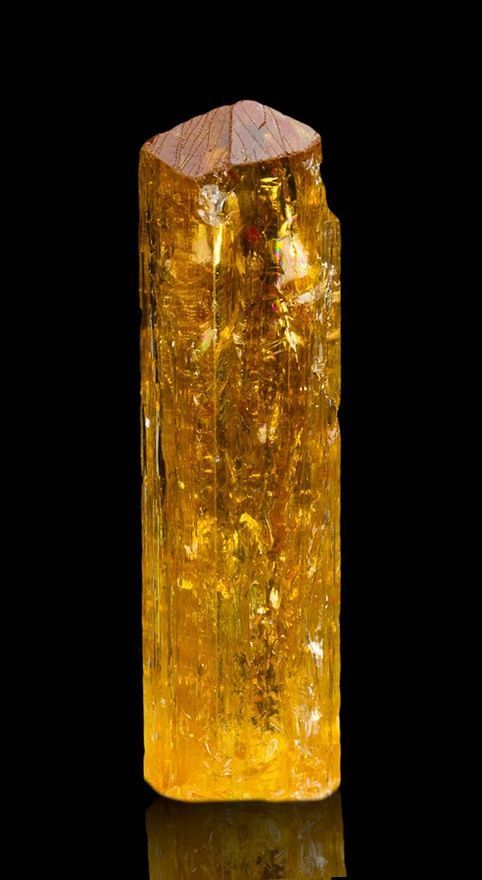 Topaz is an aluminum silicate fluoride hydroxide crystal with a hardness of 8. Its crystal structure is orthorhombic, and it frequently forms prismatic crystals, often eightsided with striations along the length. Many have diamond-shaped cross sections and pyramidal terminations. Topaz is found in Brazil, Sri Lanka, Russia, Burma, Australia, Japan, Madagascar, Mexico, Africa and the USA. Natural colors for Topaz include gold, blue, pink, brown, orange, colorless and a few other rarer shades such as pale green and red.

The name Topaz may derive from Topazos, a word meaning ‘to seek,’ which was also the name of an obscure, difficult to locate island in the Red Sea. The other possible derivation of the gemstone’s name is the Sanskrit word tapaz, which means ‘fire.’ Topaz was used in ancient Egypt and Rome and in the jewelry of eighteenth century French and Spanish royalty. Its popularity increased and spread to  England and France in the nineteenth century. In the Middle Ages in Europe, Topaz was believed to enhance mental powers and prevent insanity. It was also said to improve poor vision, promote favor with kings and civil authorities, increase wisdom and soothe anger. In current metaphysical thought, Topaz is viewed as emanating a variety of beneficial energies, varying according to the type and color.

Blue Topaz reflects the energy of the mind and of knowledge. It gently opens the throat and third-eye chakras, facilitating the communication of visions and knowledge to others. It carries the energy of the ‘fire of the mind,’ stimulating one’s ability to learn and to think through complex concepts and ideas. Natural Blue Topaz aids in expressing one’s emotions and needs. It promotes sharing and communication, as well as learning and mental perception.

SPIRITUAL Blue Topaz helps one integrate lessons and gain knowledge from one’s experiences. It helps calm the mind for meditation and can aid in communication with higher spiritual beings.

EMOTIONAL Blue Topaz has a calming, soothing effect on the emotional body. It can facilitate the communication of one’s deepest feelings and one’s highest truth.

PHYSICAL Blue Topaz is useful for sore throat, speech impediments, fear of public speaking, hyperactive thyroid (use only natural Blue Topaz for this!) and the general health of the neck and throat. It can also be used to calm migraines.