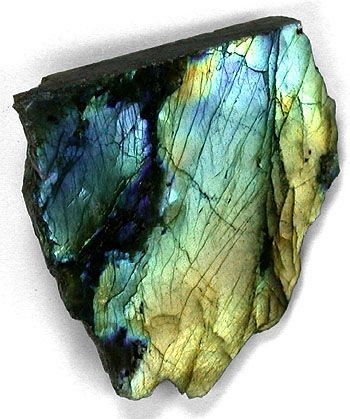 Labradorite is a plagioclase feldspar, a sodium calcium aluminum silicate with a hardness of 6 to 6.5. Its crystal structure is triclinic, usually in complex aggregates. Its name is derived from the Labrador peninsula in Canada, where the stone was first found in 1770. It is treasured for its remarkable play of color (labradorescence), which shows vivid flashes of green, blue, gold, orange, red and sometimes violet. Labradorite is found in Canada, Madagascar, Mexico, Russia and the United States.

Labradorite is the gemstone of magic, and it awakens in those who carry or wear it the awareness of one’s innate magical powers. The term ‘magic’ refers to the mental and intuitive abilities which include but are not limited communication with higher guides and spirits, and coincidence control. ‘Coincidence control’ is the practice of increasing the observed degree of synchronicity and serendipity in one’s life. Labradorite is a stone ideally suited to facilitating the enhancement of these abilities.

It activates the inner eye, allowing one to more clearly envision the past, future and distant places. Despite its dark outer appearance, it holds a rainbow of brilliant hues visible only when the stone is held in the light. This effect mirrors the energy of this ally, which enables one to move through the unseen realms while purifying one’s energies in the Light. Labradorite is a stone of strength and the unity behind apparent duality.