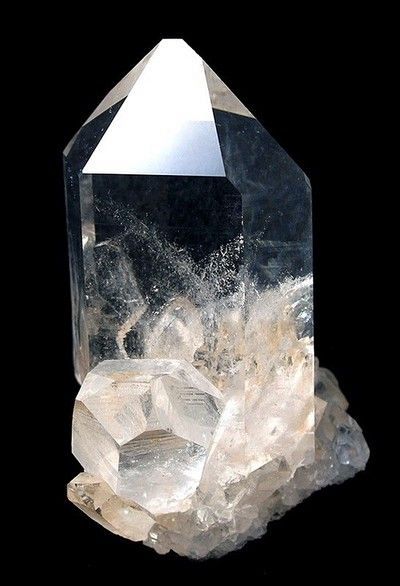 Quartz is a silicon dioxide crystal with a hardness of 7. Its crystal system is hexagonal (trigonal), and it is among the most abundant of minerals. Quartz crystals are found on every continent, and perhaps in every country on Earth. Classically, Clear Quartz stones are thought of as colorless, candle-shaped hexagonal prismatic crystals with relatively smooth sides and naturally facetted terminations at one or both ends. Quartz crystal exhibits the property of piezoelectricity, by which it can transform mechanical energy (e.g., pressure) into electromagnetic energy, and vice versa. This makes it useful in such as devices crystal radios, microphones, watches, radio transmitters, etc. Clear Quartz is sometimes called ‘Rock Crystal,’ and is the stone most often thought of when the term ‘Quartz’ is used. The name comes from the Greek for ‘ice,’ and some of the ancients believed that Quartz crystal was water frozen so hard it could never thaw. Clear Quartz has long been the subject of spiritual beliefs and folklore. Clear Quartz is by far the most versatile and multidimensional stone in the mineral realm. Three of its key properties are energy amplification, programmability and memory. Unlike most other stones, which carry certain relatively fixed properties, Clear Quartz can be ‘programmed’ by one’s focused intention to assist one in achieving virtually any goal in inner or outer life.
Especially if one practices the same programming repeatedly with the same crystal, numerous inner and outer events will seem to conspire synchronistical to bring about the manifestation of one’s wish. Of course, the more one makes a personal effort to achieve the goal, the more opportunities there will be for such beneficial synchronicities to occur. However, experiments with this type of intention amplification are likely to yield surprisingly powerful results and can also assist one in coming to fully believe in the invisible power of focused intent. The fact that the programmed crystal ‘remembers’ and amplifies the power of one’s desire can greatly assist one in ‘holding the pattern’ of energy long enough and strongly enough for manifestation to occur.
Clear Quartz is also a stone of Light, bringing heightened spiritual awareness to whoever wears,  carries or meditates with it. It provides a clear corridor for the higher vibrational frequencies of the realm of Spirit to be transmitted and translated into the world of physical form. Clear Quartz can be used to amplify the energies of other stones or to blend and enhance the energies of groups of stones. Clear Quartz can be used for almost any metaphysical purpose. Because Clear Quartz is such an indiscriminate amplifier of whatever energies surround or enter it, it can collect an unusually large amount of psychic debris. This makes it necessary for one to periodically ‘clear’ or ‘cleanse’ the crystal. This can be done in several ways. One can soak the crystal overnight in a saltwater solution (not recommended for jewellery),   place it in the sun, wave sage smoke around it or hold it in running water. In all cases, one is advised to focus the intention for clearing and cleansing in the center of the crystal. A happy side effect of this is that it will also serve to clear and cleanse one’s own personal energies at the same time!