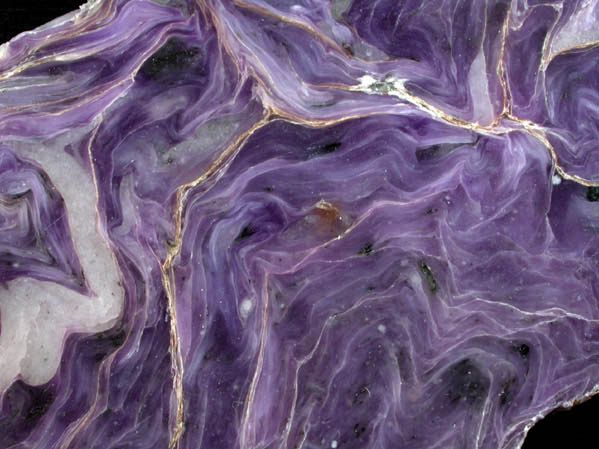 Charoite is a complex mineral containing potassium, sodium, calcium, barium, strontium, oxygen, silicon, and hydrogen. Its formation is monoclinic, it occurs primarily in dense fibrous aggregates, and its hardness is about 6. Its color ranges from pale lilac to deep purple, and it is rich in internal patterning. Sometimes black or gold colored inclusions occur as well. Charoite is found in Siberia and derives its name from the Charo River in that region.
Charoite is known for its powerful emanation of the Purple Ray. It can therefore be used to purify and cleanse one’s etheric body, releasing disharmonies and dispelling negativity. It can protect one from psychic attack and dispel the tendency to have bad dreams. It facilitates the release of unconscious fears, serving as a catalyst for the healing and transmutation of old patterns of imbalance. It can help one access past life memories and integrate the lessons of past life experience. For those suffering from difficult-to-diagnose maladies that have their roots in internalized negativity or fear, Charoite can be a powerful aid for releasing such things. It can help one merge the heart and crown chakra energies, allowing for deeper spiritual insights in an inner climate of unconditional love. Working with Charoite can increase the likelihood of synchronicities in one’s life. If one learns to notice these and the messages they imply, one can move through life as if guided by a golden thread, and the pathless path of one’s highest potential will be revealed.

Cited: Simmons, Robert; Ahsian, Naisha. The Book of Stones, Revised Edition: Who They Are and What They Teach (several pages). North Atlantic Books. Kindle Edition.